The Department of Housing and Urban Development, led by former brain surgeon and not-qualified-to-run-a-federal-agency Ben Carson, has found itself making an uncomfortable admission: Under Donald Trump, the nation’s homelessness problem is getting worse.

HUD put a partly sunny headline on its press release, but the news that follows is not good: “Homelessness crept up in the U.S.” by close to 1 percent in 2017, with local communities reporting that in particular “the number of persons experiencing long-term chronic homelessness and Veterans increased.” 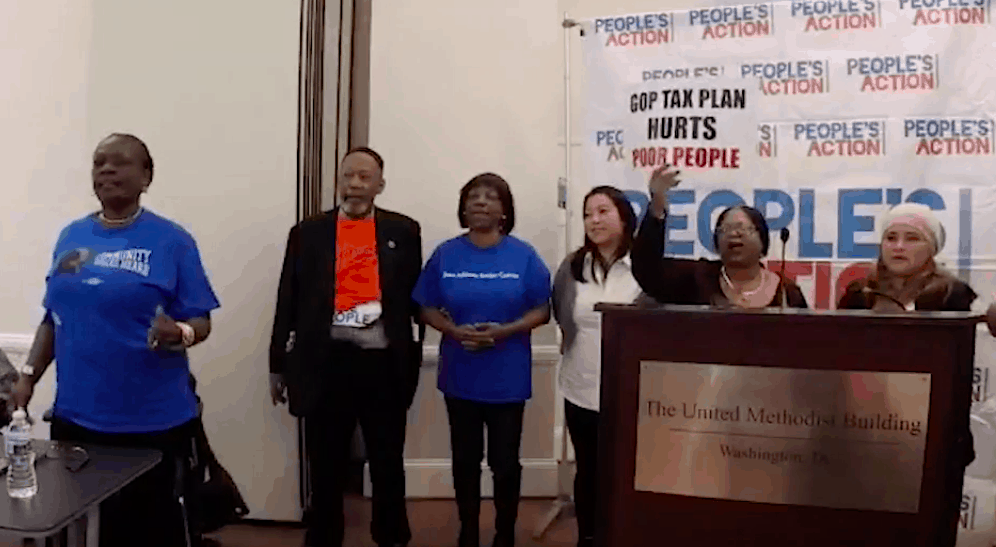 At the same time as this report came out, community leaders from across the country had gathered for a “People’s Hearing on Housing,” less than two miles away from HUD headquarters in Washington.

They hadn’t yet read the agency’s report, but they did not have to. This uptick in homelessness isn’t news for them: it’s one of the things they see firsthand as they watch the nation’s affordable housing crisis morph into a full-blown emergency.

A Voice for the Voiceless

The event was held by People’s Action in Washington’s United Methodist Building, across the street from the U.S. Capitol grounds, because of the Republican-controlled Congress’s unwillingness to hear the voices of people bearing the brunt of the emergency.

An extensive list of policy demands issued at the hearing calls for more than $3 trillion worth of investments over the next decade to address housing needs and recover some of the wealth lost particularly in communities of color because of the foreclosure crisis.

About a hundred people came to Washington from People’s Action member groups in Chicago, Seattle, New York City, Buffalo, Los Angeles and San Francisco, and from New Jersey and Wisconsin. Their first stop was a House Financial Services housing subcommittee hearing that featured housing developers and financiers but no one raising their voice for homeowners and renters.

Quietly wearing signs calling attention to the lack of affordable housing and opposing Congress’ recently passed set of tax cut bills that they said would make the housing problem worse, the group was ordered to leave.

So they told their stories instead at their own hearing across the street, which they shared on Facebook Live and with an enthusiastic audience. They were joined at key points by Sen. Bernie Sanders (I-Vt.) and Reps. Jan Schakowsky (D-Ill.) and Emmanuel Cleaver (D-Mo.). 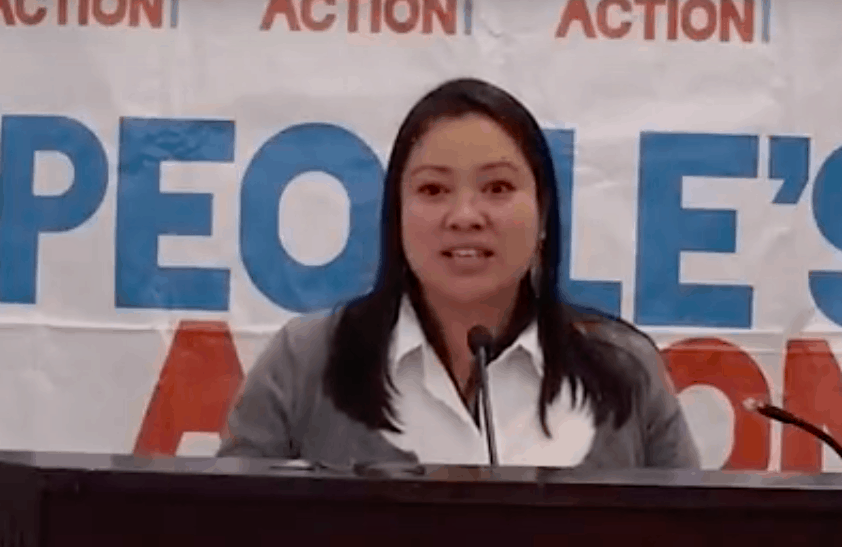 Mary Nguyen, of Washington Citizen Action Network, said she was at first overjoyed to be able to purchase a home a few years ago, but a series of financial and family setbacks conspired to force her into foreclosure.

Without a way to negotiate an alternative, her home was auctioned off last year. She had been too ashamed to tell her story publicly, thinking she was at fault for not better understanding the fine print on her mortgage. But “now I am so angry… the government bailed out the banks responsible for the 2008 financial crisis and I lost my home.”

“I am here to say it is not my shame anymore,” said Nguyen as her voice moved from the verge of tears to the verge of rage. “It is their shame, and I declare a state of emergency and demand relief for poor people who have had their wealth stolen and put in the hands of the richest.”

Some of the speakers at the hearing talked about how gentrification has driven poor and working-class families out of their communities as developers snap up properties in order to profit from the demand for high-end housing. Others pointed out the inhumane conditions in many of the nation’s remaining public housing facilities. 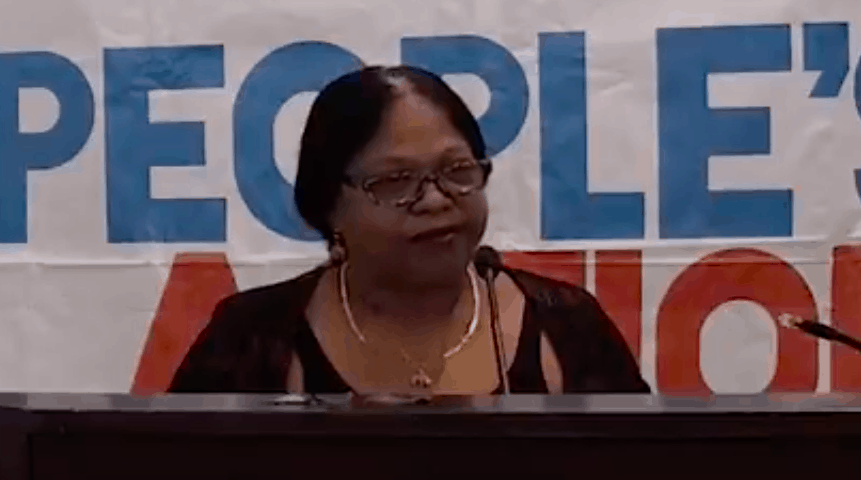 “We are being forced to live in conditions with toxic mold, rats, no heat, no hot water,” said Carmen Quiñones, a public housing resident and leader in the New York City group Community Voices Heard.

Quiñones said that in one building in her complex, a water pipe burst inside an apartment on Thanksgiving Day. “Hot water was shooting everywhere,” she recalled, threatening to scald two young children who lived in the apartment.

The nation’s affordable housing initiatives – already dramatically inadequate when compared to the need – are under increasing threat. HUD secretary Carson has already called for a 15 percent cut in overall agency funding, even though the funding that existed during the Obama administration was only enough to help one out of every four families in need.

The tax cut bills now heading to a House-Senate conference committee could do mortal damage to a major tool used by developers and nonprofits to build affordable rental units – tax credits used to offset housing construction or rehabilitation costs.

But even if those tax credits emerge unscathed from House-Senate negotiations, what remains is the stated goal of Republican leadership to cut even more money out of “entitlements” – lifelines to low-income people that enable them to feed, clothe and house themselves. 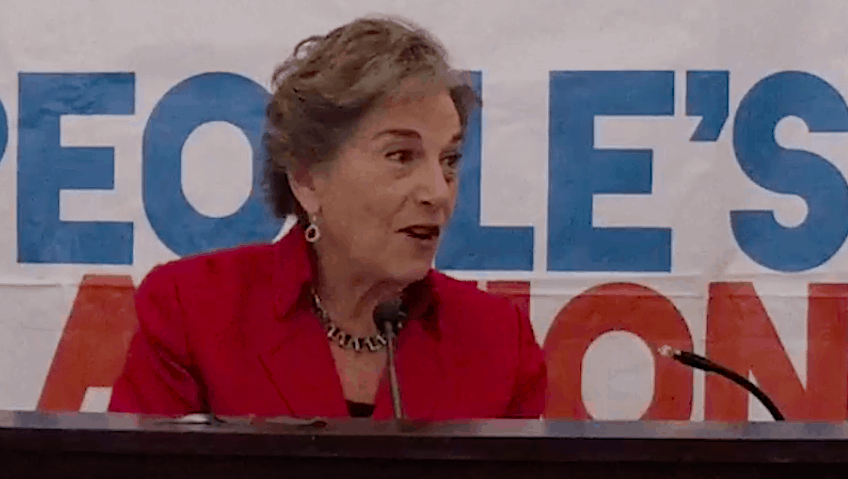 “The GOP tax scam that we’re dealing with right now puts housing funding in jeopardy” even as it lowers taxes for corporations and the wealthy, said Rep. Jan Schakowsky (D-Ill.).

43 percent of Chicago households, she said, already live in substandard or unaffordable housing, a problem that will be made worse by “the cruelty and meanness of this administration” and Republicans in Congress.

The emergency relief People’s Action is calling for includes $1 trillion in reinvestment in black and brown households over the next 10 years to offset the $1 trillion in wealth these households have lost since the 2008 financial crisis.

“Ten years later, those who have recovered wealth are disproportionately white and upper class, while several million people of color and working people remain underwater,” their fact sheet says.

An additional $1.7 trillion would be used for loans and downpayment assistance for black and brown households in communities still suffering the effects of historic and structural racism, to open up possibilities for housing equity-building that had previously been placed out of reach.

Other demands would be targeted at expanding the supply of affordable rental units, including increasing the amount of housing aid HUD administers and dramatically increasing the money available for building new or rehabilitating existing affordable housing units, both public and private.

People’s Action is also calling for prohibitions against the sale of public housing units to private developers, a national tenant’s rights bill, and a $350 billion “climate resilience fund” that would be devoted to energy conservation and green energy upgrades for low-income housing. 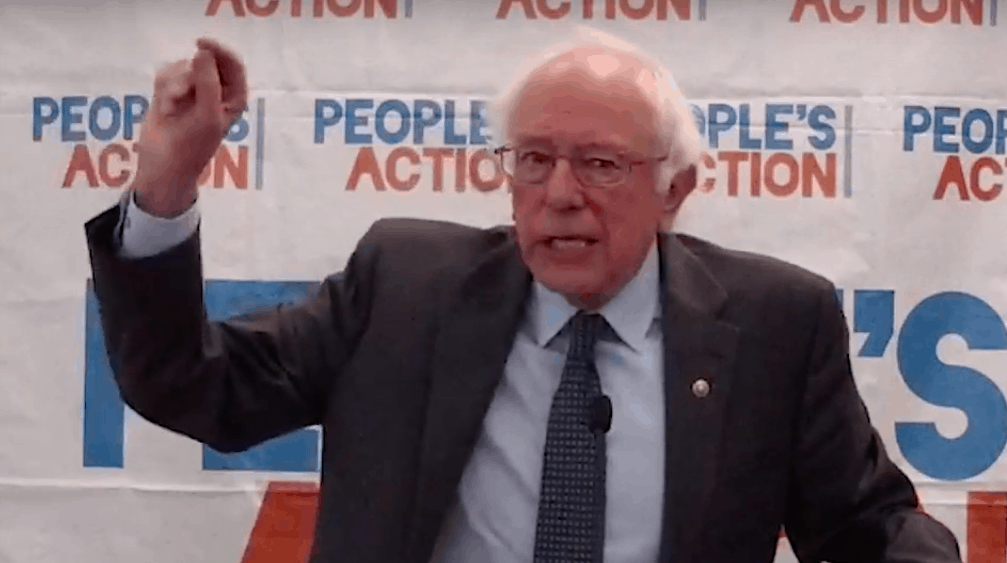 The 2016 presidential candidate recalled his own childhood growing up in a rent-controlled apartment in New York City, which “meant that my family, which did not have a lot of money, did not have to spend 50 or 60 percent of its limited income on housing.”

But increasingly in places like his native New York City, working-class families are under siege from predatory developers and landlords in a sky’s-the-limit profit grab that is leaving larger numbers of people sleeping on the couches of friends – or on the street.

“What makes sense to me is that we recognize that we have a crisis in affordable housing, and we are going to start to build the millions of units of affordable housing that working people need,” Sanders said. “When we do that we will create millions of good-paying jobs; we will allow our families to raise their children in safety and dignity. I don’t believe that is too much to ask.”