The Cook Political Report, one of the most respected handicappers of political races, doesn’t count New Jersey’s fourth congressional district – which encompasses most of central New Jersey – as even plausibly competitive for a Democrat. It’s now represented by a Republican, Christopher Smith, who is in his 19th term. In 2016, the district voted 56 percent for Donald Trump. 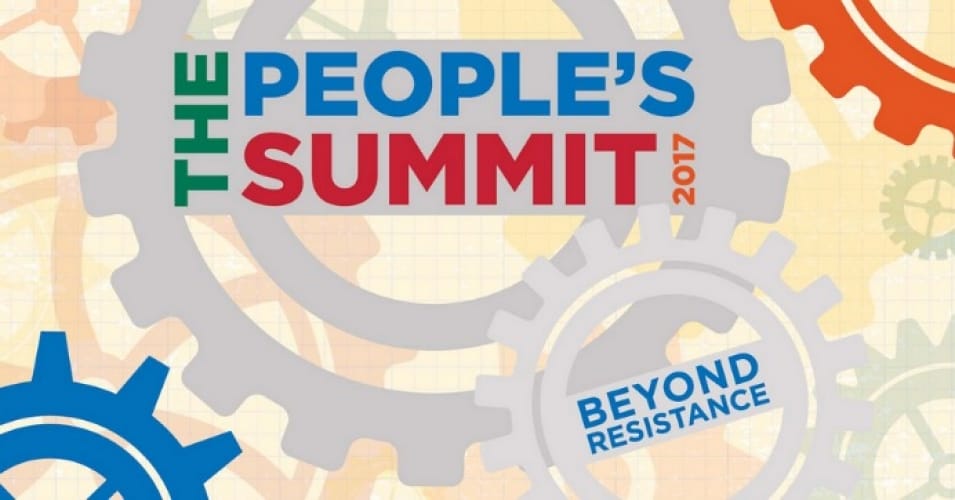 But Jim Keady – a restaurant owner who has also been active with New Jersey Organizing Project, a People’s Action affiliate – believes he can unseat Smith as a Democrat by throwing out the traditional “centrist” playbook political consultants say you have to use to win in a district like the New Jersey Fourth and instead running boldly as a progressive, Bernie Sanders-style populist.

He sees a sign that he may be right in the response he gets at events in his district when he declares his “unapologetic support for a national, single-payer health care system.”

“I can talk about 15 different issues in a meeting; that’s the one that gets the loudest applause,” he said.

The theme of the People’s Summit, a gathering of several thousand activists that concluded Sunday in Chicago was “beyond resistance,” and Keady was one of the more prominent embodiments of that theme. He was among dozens of current and prospective political candidates at the Summit striving to build upon the opposition to the Trump administration a drive toward taking real governing power.

The headline speaker, Sen. Bernie Sanders, on Saturday gave a rousing speech about an electorate that is “profoundly tired of establishment politics and establishment economics” and is ready for an anti-corporate, pro-people agenda. Given that political environment, he said, “The Democratic Party needs fundamental change.”

That change, numerous speakers at the People’s Summit said, comes from the grassroots left resurgence.

The Democratic Party is dominated by “upper-middle-class, white-collar professionals” whose guiding “principle is meritocracy, not solidarity,” said author Thomas Frank in a Sunday roundtable discussion about moving “beyond neoliberalism.” The party is “utterly unequipped to do what needs to be done in the current situation.”

The alternative, said Maria Elena Latona, executive director of Neighbor to Neighbor Massachusetts and a People’s Action board member, is to “build a politics not tied to the Democratic Party” through building person-to-person relationships at the neighborhood level around the real-life issues households struggle with.

Right-wing and corporatist politics have succeeded over the past four decades by dividing people along lines of race, gender, class, immigration status and other distinctions. “Community for us is the highest act of rebellion,” she said.

Her comments helped closed a circle that Tobita Chow, chair of The People’s Lobby, a Chicago-based People’s Action affiliate, began to draw in his remarks during the opening plenary Friday.

“Time and time again, the One Percent have tried to divide us by race and nationality, to get us to point the finger at one another, in order to consolidate their own power,” Chow said. “But we have found the enemy, and it is not each other. It is corporate power and the billionaire class, which sow division between us and profits off the suffering of our communities. Together we will defeat them and take power” through “a new movement politics where we are taking public office and exercising power over our own lives.”

That’s what Keady is trying to model in New Jersey. He got involved in politics in the aftermath of Hurricane Sandy and the failure of the state’s governor, Chris Christie, to fulfill promises to restore the communities that were hit. But in his first race for Congress in 2016, he didn’t survive the Democratic primary. He said one reason was that the advice he was getting from Democratic Party operatives was not a good fit for him, and ultimately not a good fit for the district.

“There were things that didn’t sit right in my gut, I wasn’t making the bold statements I wanted to make. I was being managed instead of being authentic,” he said.

This time, he presents himself as a polished leader with crisp responses to the issues of the day, but with an unrestrained progressive bent. He says that his district should not be written off as impossible for a Democrat to win from the left. While there are more registered Republicans than Democrats – 130,000 to 118,000 – there are 216,000 unaffiliated registered voters. “For me, that represents tremendous opportunity,” he said.

Daniel Biss, a state senator and mathematics professor in Illinois, sees a similar opportunity for progressive change in his state. He is running for governor in a crowded Democratic primary, competing against leading candidates J. B. Pritzker, a billionaire venture capitalist, and Chris Kennedy, who Biss described as “only a hundred-millionaire.” He is running because he believed that voters deserved better choices than from a suite of the ultra-rich. The choice he presents, he said, is a candidate who will “tax the rich, use the money to fund services and have a state government that works for a change.”

In a room at McCormick Place where about 50 people were considering their options about how to move beyond resistance in their own communities, Biss had a clear message.

“I see a lot of people here. Y’all need to run for office,” he said, sweeping his hand across the room. “This is not going to work, even if I win, based on one person winning one race. It’s going to work by building a movement that is everywhere.”