The economy produced only an additional 115,000 jobs in April, with the unemployment rate going down to 8.1 percent only because some 342,000 people dropped out of the labor force. This is, as co-director Robert Borosage says in his media statement today, not a “recovery” that is working for working people.

“No one should whitewash this month’s jobs numbers. The economy continues to grow, but this `recovery’ is not working for working people. Over 22 million people are in need of full time work, and job growth is barely sufficient to keep up with new entrants to the workforce. The new jobs being created are disproportionately part-time and temporary work, with lower pay than the jobs that have been lost. Young people are entering a brutal jobs market. As the Associated Press reported this week, one of two college graduates under 25 is either jobless or underemployed.

“Slow growth and mass unemployment translates into falling wages and rising insecurity. Median wages have continued to fall since the official start of the ‘recovery’. America’s middle class is still losing ground.

“We need action on jobs. Yet the Republican majority in the House has blocked the President’s jobs bill, and failed even to pass the transportation bill that would help put idled construction workers back to work. Instead they continue to push for greater austerity, more cuts in everything from food stamps to food inspectors that will simply add to the economy’s woes. They are either fools who do not understand the misery they are inflicting, or knaves hoping that a sputtering economy will help defeat the president in the fall.

“We know what to do. With interest rates near zero, and the construction industry idle, there is no better time to invest in rebuilding America, modernizing our roads, rail, water systems, and more. Young people shouldn’t pay the price for Wall Street’s excesses, so we should provide states and localities with the funds to sustain schools, rehire teachers, and provide students with the education they need.

Veterans and young people should not face extended unemployment, and the afflictions of depression, drugs, and crime that follow. We should be creating a jobs corps, an urban corps, and a green corps to provide them with work.

“Washington is too divided to act on its own. We will not get out of this mess until Americans rise up and demand action. We know what to do.”

With today’s job’s report (taking into account revisions for February and March), the country is now 788,000 jobs behind where we would need to be in order to bring the unemployment rate down to 5 percent by the end of 2014. We need to be creating an average of 400,000 new jobs a month. Instead, we lost jobs in the crucial transportation and construction sectors. Clearly, failing to move aggressively to address the underwater mortgage crisis and to fund our long-term transportation and infrastructure needs is having a toll on job creation. The loss of 12,000 local government jobs in April, and 136,000 jobs in the past year—mostly in education—is a damning indictment of the refusal of conservatives in Congress to aid state and local governments to help them shore up their local economies. 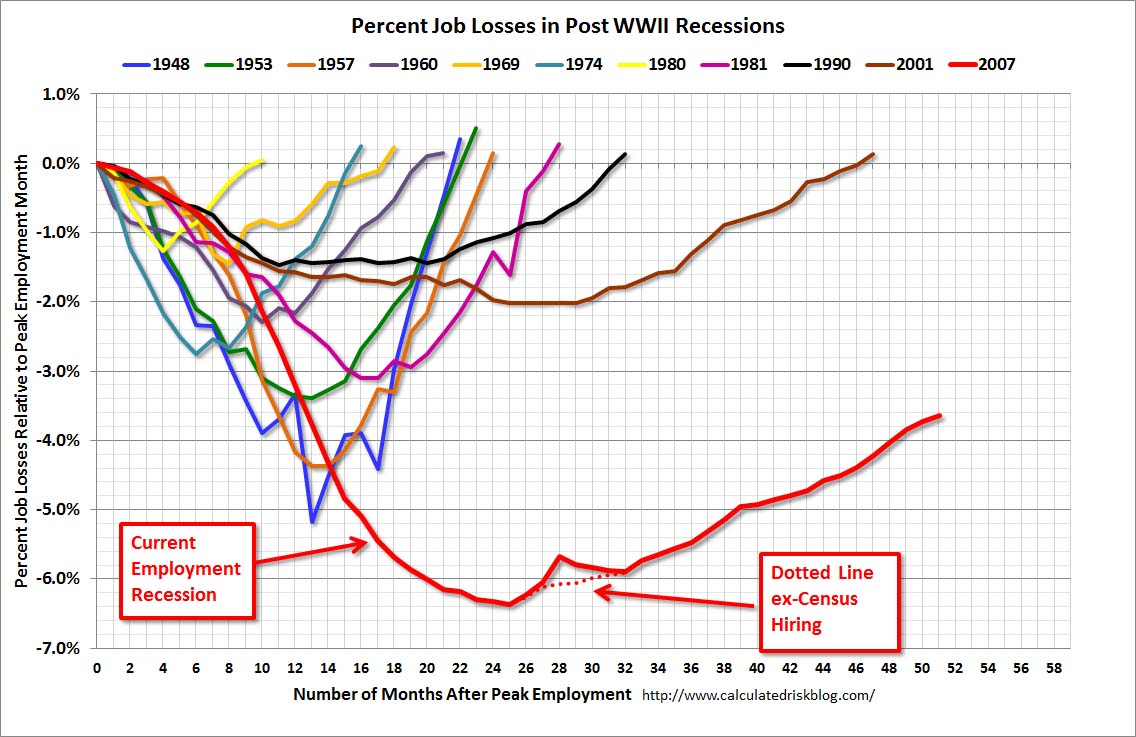 This chart from Calculated Risk also depicts what everyone looking for a job knows first-hand: today’s jobs “recovery” is the weakest on record. That is because conservatives have kept off the table the very remedies that the economy needs to truly recover: spending now to put people to work on work that needs to be done to educate our children, fix our transportation assets, and prepare for a sustainable energy future. To change this, we have to move the obstructionists out of the way.

As Borosage said today, “we will not get out of this mess until Americans rise up and demand action.” At the Take Back the American Dream conference in June, action on jobs will be at the top of the agenda. In the wake of the 99% Spring actions going on around the country, we are planning to have strategy sessions designed to not only elevate the jobs crisis but to identify and support the politicians and movements who are best positioned to break the Washington logjam on a jobs agenda for the middle class and those who have been locked out of the middle class. Every grassroots activist who cares about this issue should plan to be involved in those sessions and in the networking that will be taking place.

It’s clear that we need to make this conference big, because the jobs emergency is getting that much more serious.

Register now for the Take Back the American Dream Conference in Washington June 18-20.